Behind the Scenes: A Dilbert Tale (First to Last Concept Art)

Bringing Dilbert the Duck to Life

So what was it like bringing Dilbert the Duck to the colorful pages of his books and what was the journey in getting him from early drafts to the one we know and love?

The Journey of Dilbert the Duck

It was early morning in February.  Debbie Houghton sends me a text saying she has a big idea and wants us (my wife Ashley an I) to come over.

Debbie’s idea of a traveling duck wanting to see the parks and leave his home for adventure was one that resonated with me personally.  Ashley and I had photographed parks for years when we were wedding photographers and always believed in taking care of them and sharing their amazing views with other people.

Then she said it would be mixed media– live photos with Dilbert the Duck drawn in later.  I, of course, grew up in the days of Roger Rabbit and the idea of doing that here (however targeted at a younger audience) sounded like the funnest callback challenge ever.  It was, however, far from an easy road.

The Story of Bringing Dilbert the Duck to Life

I knew from looking at “behind the scenes” documentaries (yes, I totally love those) that what you see in the final film or product is rarely what was first put to the page.

The goal with Dilbert was to make him recognizable, even in silhouette.”
-Justin Harmon

After discussing the idea and fleshing out how Debbie pictured Dilbert, we nailed down a few ideas.  We wanted to make sure to follow a few great illustrator guidelines and also do something more original.  Here were our guides:

Round 1: Getting a Feel for Dilbert

Making a Character was harder than it seemed

Making a love-able duck that didn’t look like every other kids’ book duck proved harder than I expected.

You can see by the first attempts we had a long way to go to find the right look for Dilbert.  Some features were staples from early on, like having a large tuft of hair and a fanny pack (Ashley’s idea).  Ashley pitched that the fanny pack should hold an unusual amount of items that would be impossible to actually fit in such a small bag– which naturally became a fun visual gag in Dilbert’s pictures.

Round 2: Dilbert begins to Evolve

Dilbert begins taking on a life of his own

Over the coming months, I would pick up a sketch book and think about Dilbert and how he should look.

Since we knew live photos would have a lot of color and pop (especially in many national parks), having him stand out would be critical.  So his feathers (which come off more like fur) were always white– and would make it easy to reflect color from the ground and walls so he’d seem more ‘in the scene’.

One version lasted a little longer for a minute, but even my 12 year old said he “just wanted right”.  I had to agree, he didn’t seem right as Dilbert.  My kids were also my best focus group.

Round 3: Dilbert makes his first appearance

I remember sitting eating cereal when I started thinking of something I’d heard from an animator.  I believe it was Peter Sohn, who Russell was designed after, had mentioned that they had made Russell an egg shape so that Carl would feel a need to take care of him on their adventure.

Something about that felt perfect for Dilbert.  In a way, it was like kids wanting to follow Dilbert to make sure he was safe and even huggable.

So I grabbed my sketch pad, which had been close to me for about two months, and began to draw Dilbert one more time.  I used the face from the version Debbie had liked the most and then ‘fluffled’ him up.  I started with an egg-ish shape and began to draw around him.  As soon as I dropped the pencil, my daughter chuckled and said, “He’s so cute!”  Ashley looked at him and said, “Send that to Debbie!  That’s Dilbert!”

We waited.  It took about 3 minutes, then Debbie texted back “Perfect!  I love it so much!!!”

We were ready to put Dilbert on the pages.

Other notes about Dilbert the Duck (Behind the Scenes) 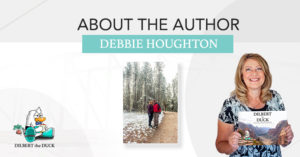 About the Author: Debbie Houghton